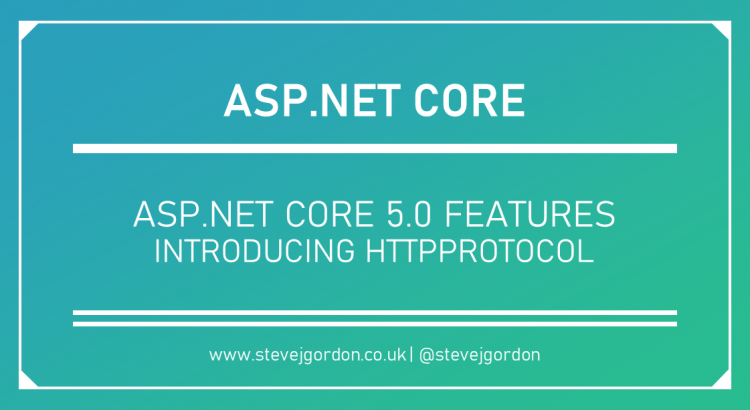 In this blog post, which will be a quick read, I’m going to begin what I expect to be a long-running endeavour, to dig into new APIs available in .NET 5 and ASP.NET Core 5.0. This time, I’m going to look at a new helper for HTTP protocol versions.

What are HTTP Protocol Versions?

Through the years, the HTTP protocol standard has evolved. To distinguish those changes, versions have been used so that clients and servers can establish the version in use. The version is included as part of the HTTP request and response. Today, the most common protocols are HTTP/1.1 and HTTP/2 with a standard around HTTP/3 already being defined.

James Newton-King introduced an issue in the ASP.NET Core repository on GitHub suggesting the addition of a helper class for HTTP protocols, similar to the existing HttpMethods helper. The objective was to remove the need to use magic strings when determining the protocol from, for example, the HttpRequest. James then submitted a pull request to add the feature which is available in ASP.NET Core 5.0 preview 1.

This feature is likely to be of limited use for most people as it’s a reasonably rare requirement outside of framework developers. Still, I’ll cover it here for your curiosity!

When developing an ASP.NET Core 5.0 enabled project with the Web SDK, the package you require will be available in your application.

You’ll need to add a using directive to your file as follows.

The first thing that the class provides is a set of static (we’ll come back to that below) strings representing the current protocol versions. We can access and use these strings when we need to provide a protocol.

You may wonder, why are the strings defined as static and not const? The comments in the HttpProtocol source code explain the reason which I found enlightening.

On this point, the class provides a few simple methods to perform protocol checking. For example, we could do the following, which will return false since the passed in the protocol is not HTTP/2.

We can also pass a string literal to compare such as this comparison which returns true.

You’ll note that the protocol check here is not case sensitive.

Exploring the code, we can see an example of the IsHttp2 method.

In the preceding example, when a reference to one of the static protocol strings is passed in, the ReferenceEquals immediately returns true. Otherwise, the check falls back to comparing the strings directly using OrdinalIgnoreCase.

The final method on the HttpProtocol helper class allows retrieval of a protocol using just a Version.

In this case, we construct a new instance of Version representing 2.0 and pass that into GetHttpProtocol. This returns a reference to the Http2 string. Passing a version that has a value which does not match a known HTTP protocol version causes an ArgumentOutOfRangeException to be thrown.

In this short post, we learned about the new HttpProcotol helper class available in ASP.NET Core 5.0 and saw a few examples of its API surface. I hope this is useful to a few people.