This weekend I published my first ever technical video on YouTube. It’s a short 8 minute introduction which explains how an ASP.NET Core 2.0 web application starts up. Specifically I chose to explore the contents of the Program class, digging into the IWebHostBuilder. It’s designed primarily for beginners to ASP.NET Core, but hopefully it will also be of interest to developers who have some experience of ASP.NET Core already.

I’ve been wanting to record some video content for a long time but it’s always been something that has slipped down my list of things to do. This past week I managed to grab some time in the evenings to experiment with the recording process and on Saturday I had a whole day free where I could focus on the recording, editing and production of my first video.

The first thing I learned is that it takes a lot longer than you might think to produce a completed video. I expected to be done by midday but in reality I wasn’t able to complete the upload before about 4pm in the end. To be fair, a lot of that was simply learning the process. I was using Camtasia for the first time and so some of the time was spent getting up to speed with that too. In the end, including experimenting with the setup, I think I spent between 6-8 hours to get this single 8 minute video finished. I expect that to reduce as I do more videos and purchase some proper equipment but it’s still a much larger investment than blogging!

The toughest issue that I faced was with the lighting. My home office is not the most well lit room in the house, and with a gloomy sky outside it was fairly dark. For this first video I put together a basic homemade setup using a couple of lamps and a reflector. My wife and I are part time photographers, so having the reflector to hand was useful. It’s not a perfect setup but it was enough to get me somewhat reasonably lit.

Based on this great post from Scott Hanselman I now have ordered a small Neewer CN 160 LED video light from Amazon which I hope will make the setup more repeatable and professional in the future. I’m hoping it arrives in time to test it out before Christmas.

The next challenge is good audio. I had a couple of options initially; using the built in audio from my Trust HD webcam or using my Microsoft headset. Neither felt like a great option so I decided to try recording the audio separately via my phone. I used my Samsung hands free headphone with microphone which I positioned in front of me connected to my Galaxy S7. I then used a Voice Recorder app on my phone to record the audio. I remembered to clap loudly at the start of the video so that I could sync up the sound and video later.

This worked reasonably well and the sound is okay for now. I used a the noise reduction enhancement in Camtasia to clean it up a little and then did some volume leveling as well. I found that getting the video and audio syncing spot on was quite difficult as Camtasia only allows the movement of tracks by frames and after one perfect take I couldn’t get the audio perfectly aligned. It was just enough out that I had to ditch that recording. My next attempt worked a lot better. Once I do more videos I’ll look to invest in a decent USB microphone and stand.

Here is my final setup for this first video: 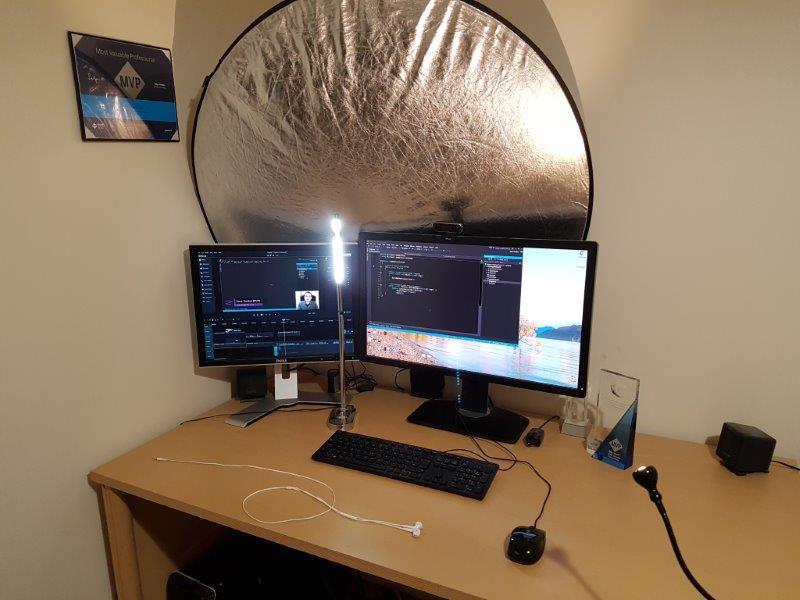 And here is the final video:

I’ll try to write a more thorough blog about the video recording process once I’ve developed it further and got it to a point where I think it’s useful for others. I hope to be able to make more time to record new content to share with you soon. Until then, please check out the video and like/share if you enjoy it. I’d welcome your comments and feedback as well.