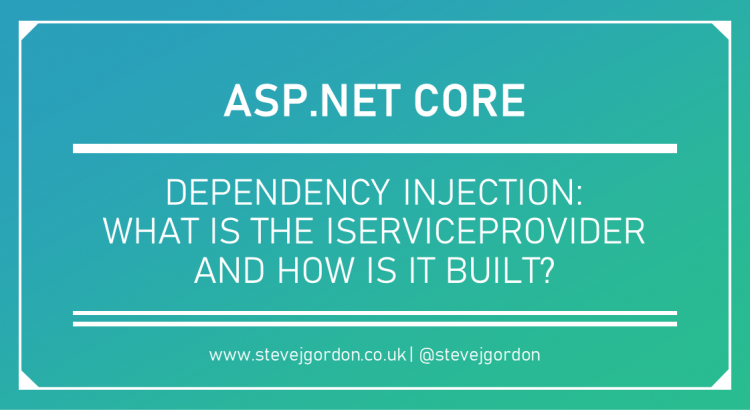 In the previous post, we learned about the IServiceCollection, including how service registrations are converted to ServiceDescriptors and added to the collection.

The IServiceProvider is responsible for resolving instances of types at runtime, as required by the application. These instances can be injected into other services resolved from the same dependency injection container. The ServiceProvider ensures that resolved services live for the expected lifetime. Its implementation is designed to perform very efficiently so that the resolution of services is fast.

After populating the IServiceCollection with ServiceDescriptors for all of our services, the next phase is to create an IServiceProvider. The service provider will be capable of resolving instances of the types needed by our application. It essentially wraps the contains the knowledge represented in the IServiceCollection.

This stage is achieved by calling BuildServiceProvider, another extension method on the IServiceCollection.

In this sample, we use the most basic overload of this method which takes no additional arguments. This calls down to another extension method that accepts some ServiceProviderOptions.

A cached Default instance of ServiceProviderOptions is used when non is provided. Its two properties ValidateScopes and ValidateOnBuild are both false by default. You can, of course, create your own instance of this class, configured as necessary and pass it into an overload of the BuildServiceProvider extension method.

We’ll see how these options are used when we look at the constructor of the ServiceProvider later in this post.

The significant lines here highlight some of the implementation details for the ServiceProvider that will ultimately be created and returned. It’s not crucial to understand these as a library consumer, but I find it interesting to dig into it, so I will!

The above code determines which engine should be used by the ServiceProvider. The engine here is the component that decides how to instantiate services and how to inject those services into objects requiring those services.

From the above code, we can see that the DynamicServiceProviderEngine is used as the preferred engine in most cases. Only in cases where the target framework is .NET Core or .NET 5 and where the runtime does not support compilation of dynamic code is the RuntimeServiceProviderEngine used. This avoids attempting to compile expressions and IL if they are only ever going to be interpreted.

The DynamicServiceProviderEngine will use either ILEmit or Expressions for resolving services. ILEmit is preferred on target frameworks where it is supported, which is basically anything besides netstandard2.0.

The constructor of the abstract ServiceProviderEngine provides further insight into the inner workings of the dependency injection library.

It creates a Root ServiceProviderEngineScope, passing in itself as the engine for that scope. As we discussed in the last post, scopes limit the lifetime of services, with the most common example being that a scope is created per ASP.NET Core request being received.

In this case, the root scope is the initial scope from which we expect services to be resolved. Singleton services are always returned from the root scope.

An instance of CallSiteRuntimeResolver is created, which we’ll see in action in a future post.

Next, a new CallSiteFactory is created, passing in the service descriptors. Call sites derive from the base ServiceCallSite type. The ServiceCallSite type is used by the ServiceProvider to track information about services it can resolve. This includes information needed to support caching those instances for the appropriate lifetime. There are different call site implementations for the various ways a service may be resolved.

For example, the ConstructorCallSite is used for the most commonly registered services and contains information about the constructor of the implementation type and details of the calls sites used to resolve any of its dependencies. Don’t worry if this is a little confusing at this point; we’ll revisit this type when we look at how services are resolved when the inner workings will become more apparent.

For now, we’ll focus on the fact that two additional ServiceCallSite instances are added manually. The call sites which are added allow the IServiceProvider and IServiceScopeFactory to be resolved from the container.

Finally, in the above constructor, a new ConcurrentDictionary is created to hold information about realised services. The Service Provider uses an on-demand design, such that services realisation is deferred until the moment when those services are first needed. Some services you add to the container may never be required by the application at runtime, in which case, they are never realised.

Here is the constructor of the ServiceProvider class.

In the above code, we can see how the ServiceProviderOptions values are used within the constructor. When ValidateScopes is true, the ServiceProvider registers itself as a callback with the engine. It also creates a new CallSiteValidator.

When ValidateScopes is enabled, the code performs two primary checks. Firstly, that scoped services are not being resolved from the root service provider, and secondly that scoped services are not going to be injected into singleton services. I talked about the danger of this in the previous post, so it’s useful to enable this option to help verify if your dependency graph violates this in any way.

Returning to the ServiceProvider constructor above, if ValidateOnBuild is true, a check is performed to ensure that all services registered with the container can actually be created. The code loops over the service descriptors, calling ValidateService on each in turn. Any exceptions are caught and added to a list wrapped inside an AggregateException at the end of the method. This check aims to ensure that all registrations are valid and all dependencies in the dependency graph can be constructed, with all of their arguments satisfied by the container.

Enabling ValidateOnBuild ensures that most exceptions from missing or faulty service registrations can be caught early, when an application starts, rather than randomly at runtime when services are first resolved. This can be particularly useful during development to fail fast and allow developers to fix the issue.

There is one caveat to this build time validation; it cannot verify any open generic services registered with the container. Registering open generics is a reasonably advanced use case and rarely needed in most applications. If we view the code for ValidateService, defined on the ServiceProviderEngine, we can learn a little more.

Immediately, we can see that first conditional, which excludes open generic service descriptors from further validation. Otherwise, the CallSiteFactory is used to attempt to create a call site from the service descriptor. Assuming a call site is returned, the OnCreate method of the _callback will be invoked, if an IServiceProviderEngineCallback was initialised. As we saw earlier, this will be the case if the ValidateScopes option is true. This method call will then also run the check to validate the scopes for the call site chain.

In any situations where GetCallSite cannot produce a valid and complete call site chain, an exception will be thrown where the message includes the name of the dependency, which could not be resolved as expected. The exception is caught and used to produce a more useful end-user exception is thrown which identifies the problematic descriptor and the invalid dependency. Build-time checks add a little extra up-front overhead but can help ensure that the majority of your service descriptors are valid.

Assuming all services are correctly registered and valid, the ServiceProvider constructor will return, and we have our built service provider.

In this post, we focused on how the IServiceProvider is built from an IServiceCollection. We explored some of the implementation details to see how the ValidateScopes and ValidateOnBuild ServiceProviderOptions are applied. We touched on a lot of internal code in this post, and most of this, while interesting, is not a detail you need to worry about as a consumer of the library. We’ve been looking at the code for version 5.x of the Microsoft.Extensions.DependencyInjection library. Remember that any of this internal implementation may change in future releases.

You can also build the service provider, passing in some ServiceProviderOptions to control the validation of services.

When the ValidateOnBuild option is true, early checks will ensure that each required service can be created, with the exception of open generics. This is achieved by inspecting each descriptor and ensuring a call site chain can be created to provide an instance and any dependencies. When the option is set to false, the default, these checks will not occur upfront, and instead, any exceptions due to missing registrations will occur at runtime as services are resolved for the first time.

The code for this example can be found up on GitHub.

In the meantime, if you have Pluralsight access, you can find my complete DI course over on Pluralsight.

In my next post, we’ll focus on how services are resolved from the ServiceProvider at runtime.