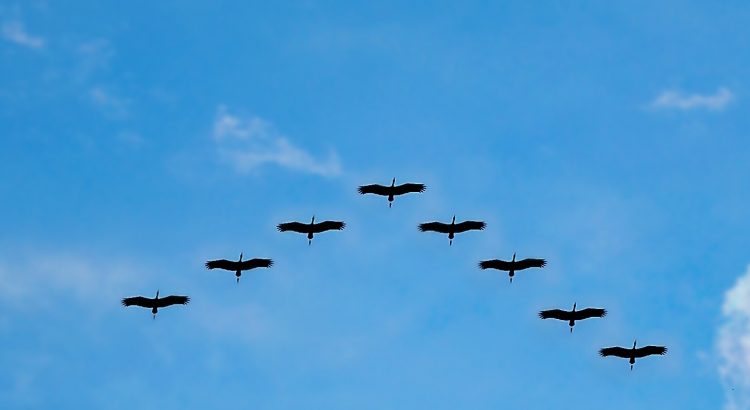 This past weekend I spent a few hours working on migrating the Humanitarian Toolbox allReady project over to the new csproj based Visual Studio 2017 solution format. I’ve written a few times about the plans to retire the project.json file introduced by ASP.NET Core. If you want some background you can read those posts first (don’t worry, I’ll wait)…

The summary is that in Visual Studio 2017 and the final ASP.NET Core SDK tooling, the project.json file was removed in favour of a revised csproj file. This has left some people confused and wondering why project.json is missing in Visual Studio 2017. The decision was mostly made to support customers reliant on using MsBuild and to support migrating larger projects to .NET Core.

Moving from project.json to csproj

In this post I wanted to cover the steps I took to migrate a real ASP.NET Core application to Visual Studio 2017. I’ve recorded the steps that I took and the issues I faced, along with any solutions I was able to find.

TL;DR; It wasn’t as painful as I’d expected it might be, but it also wasn’t entirely automated. There were a few issues along the way, which required some intervention on my part to finally get everything building correctly.

My first trial attempt at this process was actually about 2 weeks ago. At that time I was using the first RTM version of VS 2017 and I started by simply opening our allReady solution file with Visual Studio 2017.

Visual Studio presents a dialog showing that any project.json projects will be migrated. 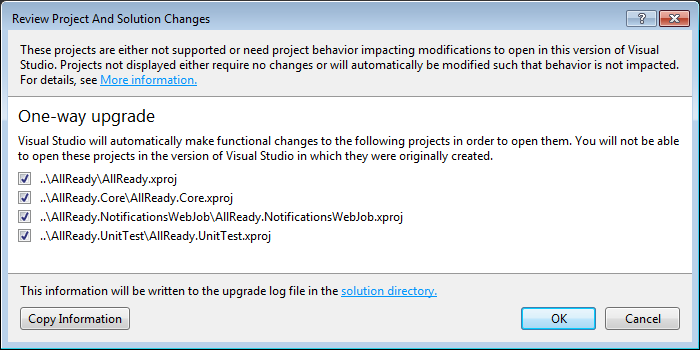 After accepting that message VS will do it’s thing. Under the covers it’s calling the dotnet migrate command which handles the conversion for you. I decided to use Visual Studio 2017 for the migration, rather than the command line as I expect that’s the approach most people will be taking.

During migration; which took only a few seconds for me, you’ll see a progress window from Visual Studio.

Once the migration is completed you are shown a migration report. 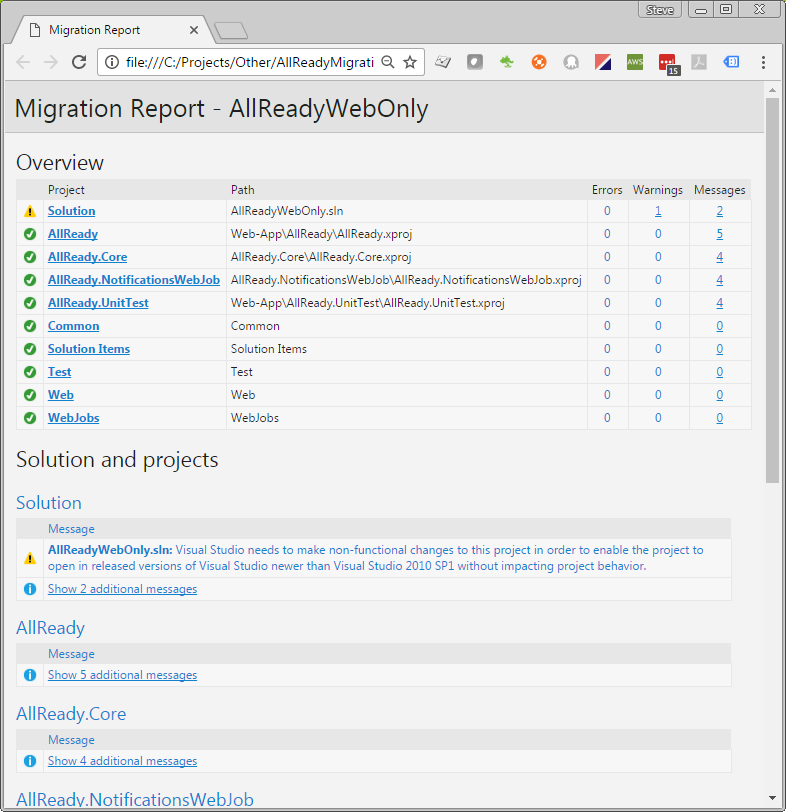 This initially led me to believe that things had gone pretty well. In fact, when I tried a restore and build things were not quite so positive. I was shown a staggering 982 errors and 3 warnings. It was late and I was tired, so I decided to abandon attempt one at that point! That was a problem for my future self!

This weekend I was finally in a position to have another try at the migration. I took the latest version of our code and before starting, updated Visual Studio 2017 because I’d seen that it had some updates pending.

I repeated the initial steps as before and this time, although the result was still not looking great, it was a fair amount improved on attempt 1. Lesson 1 – Always do migrations with the most updated version of the IDE! This time I was at 199 errors and 2 warnings.

The errors were mostly relating to dependencies so it looked to be a restore issue. I tried cleaning the solution, restarting Visual Studio and even manually deleting the bin and obj folders. Each time I was hit with a wall of red errors when trying to build.

At this point I jumped onto Google and found a suggestion to clear the local nuget cache. I navigated to %USERPROFILE%/.nuget and deleted the contents.

Upon doing that, things were starting to look a little better. The errors cleared but I now had some warnings to deal with and the site would not run.

The second warning was a little strange.

The referenced project ‘..\..\Backup\Web-App\AllReady\AllReady.csproj’ does not exist.

The unit test project was referencing the web project but using the backup folder path. The backup folder is created during migration to hold the original project.json and xproj files in case you need to get back to a prior state. That folder of course didn’t include a csproj file. I removed the reference and re-added it, pointing it to the correct folder.

I also took the chance to move the backup folder so that it was outside of my main solution structure, just in case it was causing or masking any other issues.

Attempting to build at this stage reduced my errors but I still had 29 warnings. To be sure that Visual Studio 2017 wasn’t partly to blame, I also tried using the command line dotnet restore commands directly. However, I was getting warnings there also. 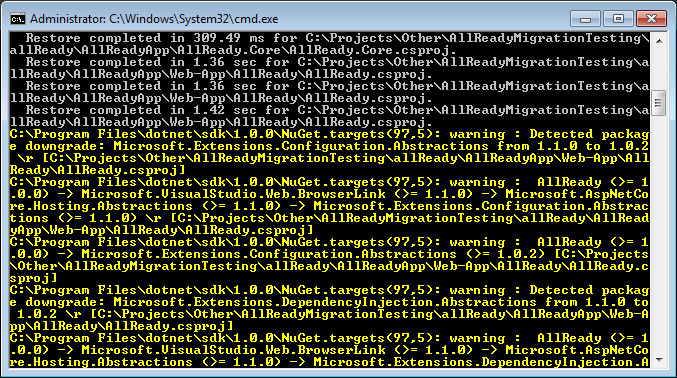 Detected package downgrade: Microsoft.Extensions.Configuration.Abstractions from 1.1.0 to 1.0.2

Trying to run the application at this stage resulted in the following exception:

System.IO.FileLoadException: ‘Could not load file or assembly ‘Microsoft.Extensions.Configuration.Abstractions, Version 1.1.0.0 … The located assembly’s manifest definition does not match the assembly reference.

For some reason the migration had chosen version 1.1.0 for the Microsoft.VisualStudio.Web.BrowserLink dependency when it created the csproj file.

The solution was to change it to 1.0.1 since allReady is targeting the LTS stream of ASP.NET Core currently. All of the other dependencies were registered with their LTS versions. This rouge 1.1.x dependency was therefore causing version conflicts.

At this point, building the solution was getting a bit further. I now had a single warning left for the web project. This warning stated that AddUserSecrets(IConfigurationBuilder) is now an obsolete method.

The warning explains that we were now expected to pass in the user secrets key as a string to the method or use .AddUserSecrets<TStartup> which is syntactic sugar over AddUserSecrets(this IConfigurationBuilder configuration, Assembly assembly). Previously the storage location for the user secrets ID was the project.json file. It’s now moved to an assembly attribute. The previous overload is not guaranteed to return the correct Assembly so this could produce issues. You can read a fuller explanation from the team on the GitHub repo.

In our case I changed the appropriate line in Startup.cs from

At this point the web project was building but there were issues inside the test project:

Found conflicts between different versions of the same dependent assembly that could not be resolved. These reference conflicts are listed in the build log when log verbosity is set to detailed.

Some of the dependencies we had been using had newer versions so I took a guess that perhaps I needed to update the Xunit / test related ones. I changed these three dependencies:

Finally the entire solution was building, tests were running and I could start the website locally.

Generally, everything seems to work once inside Visual Studio 2017. The migration process was a little more effort than I would have liked though.

In Visual Studio 2015 we had version auto complete for the dependencies from NuGet when editing project.json. We’ve lost this in Visual Studio 2017 which is a shame. It now pretty much forces me into the NuGet Package Manager which I find slower. I understand that autocomplete might come back at some point, but it’s a shame we’re lacking it upon release.

Personally, I still prefer the project.json format for readability. There’s still a little more noise in the XML than we had inside the JSON version. That said, the work done to the revised csproj format is great and it’s a vast improvement on the csproj of the past.

Overall the process wasn’t too harrowing. Visual Studio and dotnet migrate handled most of the work for me. It was a shame that I had to resort on a few occasions to Google for manual solutions to solve problems that I’m sure should have been addressed by the tooling. The restore of the dependencies not working without clearing the cache was an unexpected problem.

But with the work of migration behind me I’m ready to move on. I’ve reached the acceptance stage on my project.json grieving process!

Anyone new to ASP.NET Core, using it for the first time in Visual Studio 2017 will probably look at older blog posts and wonder what we were all moaning about. The csproj is a great improvement on what we had in the past, so if you’ve never seen project.json, there’s nothing to miss and only improvements to enjoy.