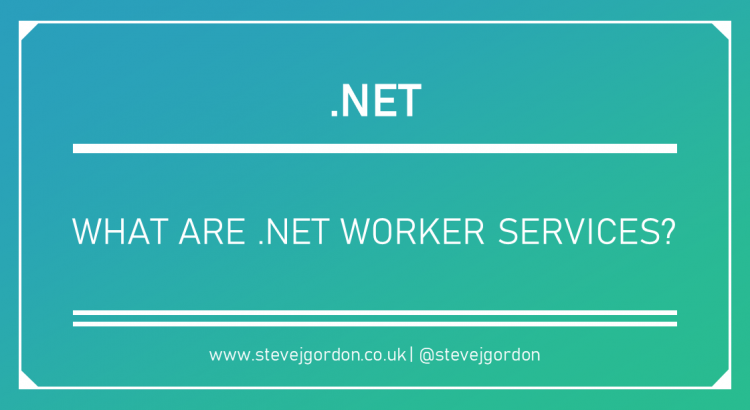 With the release of .NET Core 3.0, the ASP.NET team introduced a new “Worker Service” project template, which is available as part of the SDK. In this post, I’ll introduce the new template, along with some practical examples of the kinds of services which I develop using it.

If you find the information in this post useful and plan to build your own worker services, may I suggest viewing my new course on Pluralsight – “Building ASP.NET Core Hosted Services and .NET Core Worker Services“. I dive deeply into worker services and demonstrate how to refactor parts of a web application as microservices.

What is a .NET Core Worker Service?

A worker service is a .NET project built using a template which supplies a few useful features that turn a regular console application into something more powerful. A worker service runs on top of the concept of a host, which maintains the lifetime of the application. The host also makes available some familiar features, such as dependency injection, logging and configuration.

What Does The Worker Service Template Provide?

It’s entirely possible to develop a long-running worker service without using the worker service template. I was doing so in early versions of .NET Core, manually establishing a host with a dependency injection container and then initiating my processing workloads.

The worker service template includes useful foundational components, like dependency injection, by default so that we can focus on building our business logic on top. It includes a host which manages the lifecycle of the application.

The worker service template is reasonably basic and includes just three core files out of the box.

The first of which is a Program class. This class consists of the required Main method entry point for .NET console applications. The .NET runtime expects to locate this method within the Program class when it starts your .NET application.

Included within the Program class, as part of the worker service template, is the CreateHostBuilder private method which creates an IHostBuilder. The IHostBuilder interface defines a type which uses the builder pattern to produce an instance of an IHost. The template creates a new HostBuilder by calling the static CreateDefaultBuilder method on the Host class.

There’s one service registration included by default which I’ll come back to a little later in this post. Let’s not worry about it for now.

The CreateDefaultBuilder method is called from within the Main method and is used to build and then immediately run the host. When the runtime calls the Main method, the application will be started, and the host will keep it running, listening for typical shutdown signals such as the CTRL+C keys being pressed.

In worker services, the same configuration sources, including this appsettings.json file and environment variables will be inspected at startup, with the final configuration being built from the various sources. A number of default providers, and therefore sources, are loaded by default. If you need to, it’s possible to customise the providers which the host uses to load configuration data.

Configuration is another core topic for ASP.NET Core and worker service applications and is also available as a Pluralsight course.

The Worker class is something new which you will not find in the default ASP.NET Core project template. This is where the magic of hosted services, combined with the host, provide the basis of a worker service.

Let’s take a peek at the code.

David Fowler kindly provided the implementation in that post and that code eventually formed the final BackgroundService class which is now included as part of the hosting abstractions package.

BackgroundService includes an abstract method named ExecuteAsync which we must override in our subclass, just as the worker class, provided in the worker service template, does here. ExecuteAsync returns a Task which internally the BackgroundService expects to be some long-running workload. It will start the Task, which then runs in the background.

How do I Register an IHostedService?

The next logical question is, how do I register an IHostedService? If we head back to the code from Program.cs, we’ll find out.

Inside the ConfigureServices method, types can be registered with the dependency injection container. An extension method is defined for the IServiceCollection called AddHostedService, which allows us to register a class which implements IHostedService.

The template has already registered the Worker class as a hosted service.

At startup, the host will locate all registered instances of IHostedService and start them in order, at which point, their long-running workloads run as background Tasks.

The simple answer is – when and if you need them! If you have a requirement to develop a microservice which has no user interface and which performs long-running work, then a worker service is very likely going to be a good fit.

Remember that a worker service is just a console application under the hood. That console application uses a host to turn the application into something which runs until it is signalled to stop. The host brings with it features like dependency injection that you’ll likely already familiar with. Using the same logging and configuration extensions available in ASP.NET Core makes it easy to develop worker services which should log information and which require some configuration. These requirements are nearly always present when building worker services that will run in the cloud. For example, you will likely need to provide configuration for any external services that your worker service will interact with. A queue URL for example.

Worker services can be used to extract responsibilities from existing ASP.NET Core applications (I cover this in my Pluralsight course) and to design new .NET Core based microservices.

What Files Are Part of the Worker Service Template?

What Are Worker Services?