In my previous posts in this series (An Introduction to HttpClientFactory and Defining Named and Typed Clients) I introduced some core concepts and then showed some examples of using the new IHttpClientFactory feature in ASP.NET Core 2.1. It’s been a while since those first two posts but I’d like to continue this series by looking at the concept of outgoing request middleware with handlers.

IMPORTANT NOTE: the features shown here require the current preview build of the SDK and the .NET Core and ASP.NET Core libraries. I won’t cover how to get those in this post. At the time of writing we’re in preview 2 of .NET Core and ASP.NET Core 2.1. This preview should be reasonably feature complete but things may still change. If you want to try this out today you can get the preview 2 installers but I recommend waiting until at least the RC before producing any production code.

To be clear from the outset; many of the pieces involved in this part of the feature have existed for a long time. HttpClientFactory simply makes the consumption of these building blocks easier, through a more composable and clear API.

When making HTTP requests, there are often cross cutting concerns that you may want to apply to all requests through a given HttpClient. This includes things such as handling errors by retrying failed requests, logging diagnostic information or perhaps implementing a caching layer to reduce the number of HTTP calls on heavily used flows.

For those familiar with ASP.NET Core, you will also likely be familiar with the middleware concept. DelegatingHandlers offer an almost identical concept but in reverse; when making outgoing requests.

You can define a chain of handlers as a pipeline, which will all have the chance to process an outgoing HTTP request before it is sent. These handlers may choose to modify headers programmatically, inspect the body of the request or perhaps log some information about the request.

The HttpRequestMessage flows through each handler in turn under it reaches the final inner handler. This handler is what will actually dispatch the HTTP request across the wire. This inner handler will also be the first to receive the response. At this point that response passes back through the pieline of handlers in the reverse order. Again, each handler can inspect, modify or use the response as necessary. Perhaps for certain request paths you want to apply caching of the returned data for example. 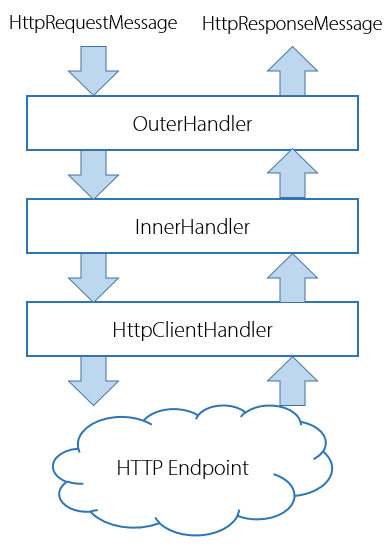 In the diagram above you can see this pipeline visualised.

Much like ASP.NET Core middleware, it also possible for a handler to short-circuit the flow and return a response immediately. One example where this might be useful is to enforce certain rules you may have in place. For example, you could create a handler which checks if an API key header is present on outgoing requests. If this is missing, then it doesn’t pass the request along to the next handler (avoiding an actual HTTP call) and instead generates a failure response which it returns to the caller.

Before IHttpClientFactory and its extensions you would need to manually pass a handler instance (or chain of handlers) into the constructor for your HttpClient instance. That instance will then process any outgoing requests through the handlers it has been supplied.

We’ll start by defining two handlers. In order to keep this code simple these aren’t going to be particularly realistic in terms of function. They will however show the key concepts. As we’ll see in future posts, there are ways to achieve similar results without having to write our own handlers.

To create a handler we can simply create a class which inherits from the DelegatingHandler abstract class. We can the override the SendAsync method to add our own functionality.

In our example this will be our outer request. A StopWatch will be started before calling and awaiting the base handler’s SendAsync method which will return a HttpResponseMessage. At this point the external request has completed. We can log out the total time taken for the request to flow through any other handlers, out to the endpoint over HTTP and for the response to be received.

Just to keep things interesting let’s create a second handler. This one will check for the existence of a header and if it is missing, will return an immediate response, short-circuiting the handler pipeline and avoiding an unnecessary HTTP call.

Now that we have created the handlers we wish to use, the final step is to register them with the dependency injection container and define a client. We perform this work in the ConfigureServices method of the Startup class.

The first two lines register each handler with the service collection which will be used to build the final service provider. These need to be transient so that a new instance is provided each time a new HttpClient is created.

Next, we define a client. In this example I’m using a named client for simplicity. Check out my previous post in this series for more detail about named and typed clients. The AddHttpClient method in this case returns an IHttpClientBuilder. We can call additional extension methods on this builder. Here we are calling the generic AddHttpMessageHandler method. This method takes the type for the handler as its generic parameter.

The order of registration matters here. We start by registering the outer most handler. This handler will be the first to inspect the request and the last to see the response. In this case we want our timing handler to record complete time taken for the whole request flow, including time spent in any inner handlers, so we have added it first. We can call AddHttpMessageHandler again, this time with our ValidateHeaderHandler handler. This will be our final custom handler before the inner HttpClientHandler is passed the request to send the request over the network.

At this point we now have an outgoing middleware pipeline defined on our named ‘github’ client. When a request comes through this client it will first pass into the TimingHandler, then into the ValidateHeaderHandler. Assuming the header is found the request it will be passed on and sent out to the URI in the request. When the response comes back it first returns through the ValidateHeaderHandler which does nothing with the response. It then passes onto the TimingHandler where the total elapsed time is logged and then finally is returned to the calling code.

While I have shown how easy it is to create a DelegatingHandler and then add it to your HttpClient outgoing pipeline using the new extensions; the team hope that for most cases you will not find yourself needing to craft your own handlers. Common concerns such as logging are taken care of for you within IHttpClientFactory (we’ll look at logging in a future post). For more complex but common requirements such as retrying failed requests and caching responses a much better option is to use a third party library called Polly. The team at Microsoft have made a great decision integrate with Polly.

In my next post I’ll investigate the options for adding Polly based handlers with IHttpClientFactory. In the mean time I suggest you check out this post by Scott Hanselman where he covers the Polly extensions. You can also check out the Polly wiki for more information.

Other Posts in this Series