It’s been a while since I last got around to blogging about a .NET South East meetup event. I wanted to make sure I did this month as the plan for this week’s event was close to my heart. I had the idea back in December / January to try and organise a night for new speakers. The motivation behind that was my own experience. I’ve blogged in detail about that but in case you don’t have a few hours spare to both parts, the TL;DR is as follows…

Through my life, I’ve always hated public speaking. The idea of giving a talk or even an introduction to a room of people filled me with a fair degree of dread. Last year I faced my fear by taking part in an ALT.NET show and tell evening. I had 20 minutes to share my experience of working on the Humanitarian Toolbox project. While terrifying beforehand, the actual experience was actually quite enjoyable. Afterwards, the rush and positive feedback was a great feeling. After that first talk, I ended up speaking at two other user group events and two conferences in 2018. While I still get nervous, I’ve found that I actually really enjoy presenting and this year I am extending the number of events I submit and speak at.

Back to the meetup; I wanted if possible to offer other members of the community a safe place for them to try out public speaking. I set aside a date and started promoting the idea to our members. My biggest concern was that no one would be interested and the idea would fail at stage one. However, after a couple of months of asking for speakers, people started to come forward. I know from experience that taking that initial step and committing is no small thing for novice speakers.

With the speakers lined up, I was feeling better about the idea. The next concern was attendee numbers. I was conscious that in order to attend the meetup it requires people to give up a free evening. As a result, people are selective on which meetups they choose to attend. Frankly, I wasn’t sure if the idea of an evening of new speakers with shorter talks would draw in attendees. That concern slipped away as I saw that our RSVP numbers on meetup.com were looking healthy. I was very pleased that members of the community were coming together to support our peers and to join us for the evening.

The evening began as normal with me introducing the meetup and then going onto present some news items. I wasn’t short of content for this event, holding it the week after MS Build! One slight hitch was that the slides I’d carefully crafted at home hadn’t synced on my OneDrive and as a result, with an hour to go I found myself rapidly recreating the content!

With the news complete, we entered the main part of the evening. I’d allocated each speaker twenty minutes of presentation time, plus five minutes for questions.

First up was Dave Mateer who presented a demo-heavy talk. Presenting demos is always daunting but Dave’s went off without a hitch. Dave crammed a lot into his 20 minutes, demonstrating how he’d taken a legacy and poorly configured WordPress site and migrated it to running in the cloud on Azure AKS. Azure AKS is Microsoft’s managed Kubernetes service and by all accounts looks like a great way to get started with containers in production. Dave highlighted the salient things he’d learned along the way. Showing how data volumes can be used to persist data outside of the container for example. Dave also highlighted the power of scripting which means he can quickly spin up and when required delete his Kubernetes environments. Within his twenty minutes, Dave had taken us on a journey from running a container locally, through to a scripted deployment to production, with the site running live on Azure. It was a great talk and really interesting to learn from Dave’s experience. 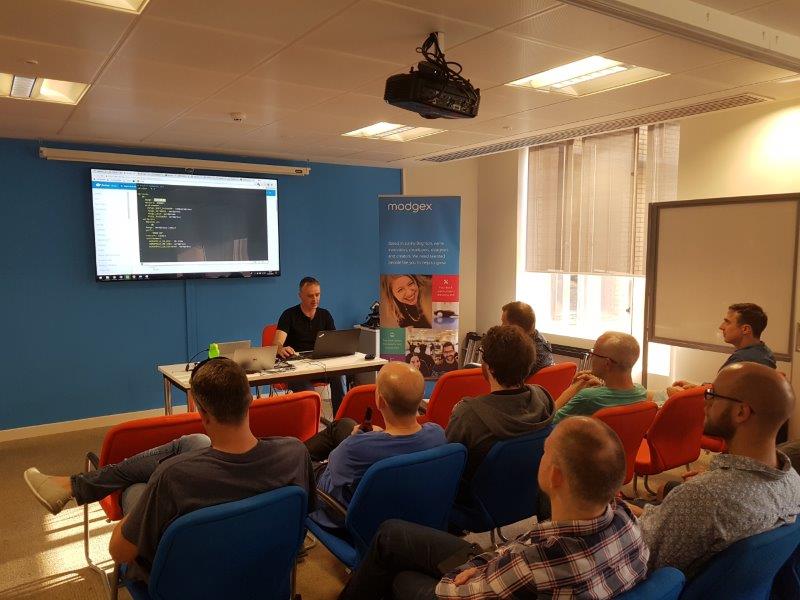 Next up was Steve Collins who talked about a SOLID approach to ASP.NET Core. His focus was on configuration and what he’s learned as he began working with ASP.NET Core. Steve first explained a history of configuration in ASP.NET through the previous version. He brought us up to date by showing how ASP.NET Core out of the box provides DI friendly configuration and the options pattern for accessing your configuration values. One of the gotchas that Steve highlighted was the need to use the IOptions and IOptionsSnapshot interfaces to access strongly typed configuration in your dependent classes. This isn’t necessarily easily discoverable for newcomers to ASP.NET Core. Steve then showed how he’d built out a more intuitive pattern over the top that allows for accessing configuration via a bridge class. It was a great talk and Steve touched on some patterns I’m finding myself using on my latest projects. Steve has documented the content that formed this talk in his great four-part blog series which I recommend you go and check out. 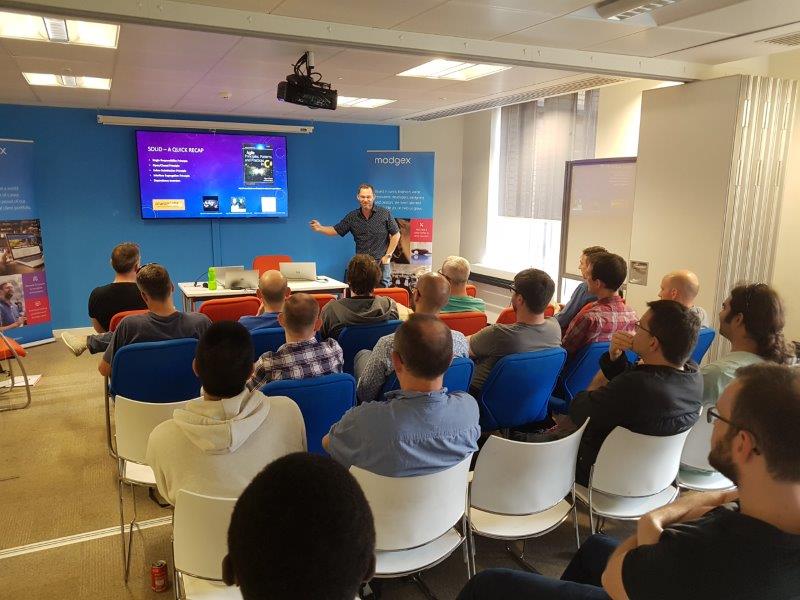 We then had a short break before our final talk of the evening. Alex McAuliffe took to the stage to talk about “Falling down holes for beginners”. In this talk, he shared his experience of working on and maintaining an open source project. Alex covered some of the positives of open source before also discussing some things to watch out for. One of the really salient points regarding running your own project was around scoping and focus. As Alex described it’s very easy to get excited about lots of areas of the code and also trying to make things “perfect” which can easily lose the focus on actually completing things. Alex also talked about an unexpected outcome of working on the project; burnout. It’s not always something you would consider when working on a personal project but is certainly something to watch out for. Alex also shared some thoughts on tools for source control and to help maintain code quality. Finally, he concluded with some resources to blogs and people to follow on Twitter. Alex’s slides are available online. 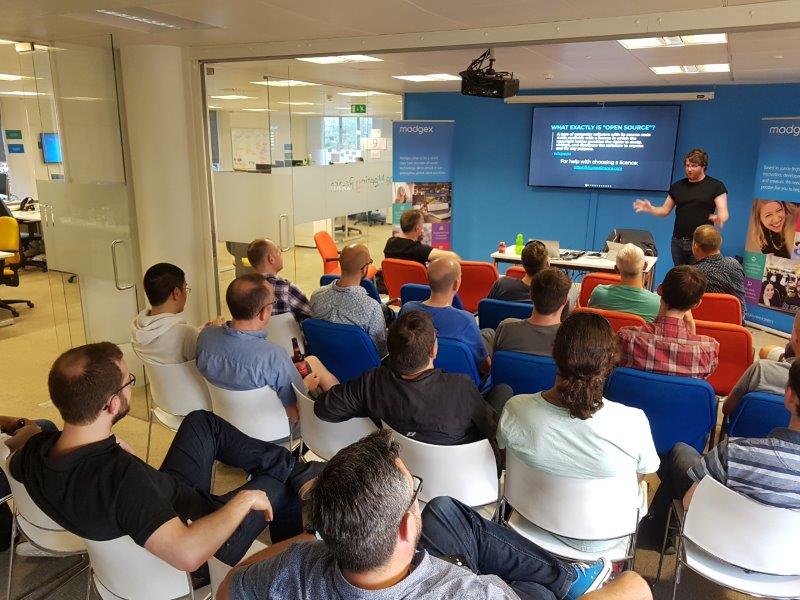 It was extremely impressed by all three talks. Dave, Steve and Alex had clearly put a lot of effort into preparing their slides, demos and content. Despite having a quite short time limit, each one packed a lot of great content into their allotted time. Having spoken to some of the attendees after the event I got the sense that everyone had enjoyed listening to the talks and the format of the evening in general. I want to repeat my thanks once again to the speakers for volunteering and taking part. I know that standing up in front of a crowd can be intimidating and I hope that all three enjoyed the experience overall.